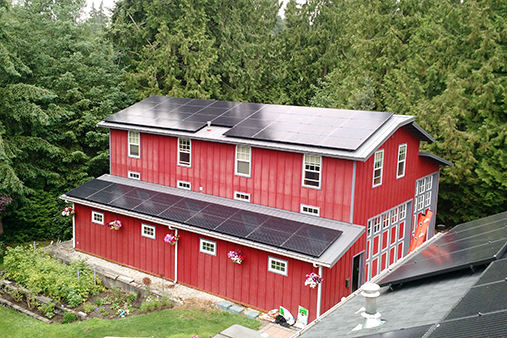 Are you a homeowner in Washington or Oregon interested in going solar and/or the Tesla Powerwall? Contact us for a free estimate!

As happens in American conversations one of the first things you ask when meeting someone is “What do you do?”  For me, the rest of the conversation usually goes something like this:

Me: “Yes. We install solar panels on people’s homes and businesses.”

You: “I don’t mean to sound like a jerk, but does that even work up here?”

Me: “Absolutely, without going into too much detail, we have customers that are 100% solar powered without having to resort to batteries.”

You: “No way! I had no idea. I just figured that since we didn’t have sun like California it just wouldn’t work up here.”

Me: “I guess we all have to be wrong some time.”

Okay, well maybe I’m more polite and not so passive aggressive in ending the conversation, but it is one I’ve had since I started in the solar industry in the Pacific Northwest. Much to the chagrin of many of my friends, I have a hard time not talking about solar energy and our business. I’m kind of proud of them.

Since I’m not trying to participate in a polite two-way conversation in public let me go ahead and talk more about how our customers are going “100% solar powered” here in Washington and Oregon.

In other places on this blog and website we have information about how we have more sun than Germany (among the world leaders in installed capacity for solar production). You can also read about net metering, which allows you to build up credits with your utility.  And then there is the Tesla Powerwall and other storage options. But what I haven’t mentioned is what it takes for someone to have all of their consumption covered by their solar panels.

Why Knowing Consumption is Important

Another conversation we have with people every day is:

Me: “I have no idea.” Forgive the passive-aggressive tone again, but hey I never get to actually say this stuff to a real person!

In reality I really have no idea how many solar panels you need to cover your consumption if you live in 2,000 square foot house. Solar doesn’t work like that.

Here’s what we need to know as a solar contractor: Are you the type of person that has a flat screen TV in every room, a massive stereo, an electric vehicle, and a hot tub, or do you prefer to read books by candlelight at night under a blanket?

Instead of asking such personal questions of you, we ask to see a copy of your electric bill.  Your electric bill tells us exactly how much electricity you consume as measured by kilowatt-hours or kWh.

How We Estimate Expected Production

The other information we need to know is how much sun do you get, what is the orientation (south, east or west) of your roof, and what is the pitch (how steep) is your roof?

Much of this information we can get by looking at satellite imagery (Google Maps). I’ll use my home in Seattle as a reference. I can see that this roof faces east and west, has a moderate pitch, and the tree to the southwest of the house is going to greatly impact production, but maybe the east face roof will be a fine place for solar panels.

In the case of this house we would need to come onsite to get a more accurate reading of how much shade those trees cause. We use a device called a Suneye to do that. A Suneye measures the total potential solar energy given the shading of a particular site..

A big ole weeping birch shades the west side of the house by 38 percent (also known as 62 percent solar access).  With numbers like these it is not usually a good place to install. But because I’ve done a full evaluation of this house, I also know that the east side is still a good location for solar panels.

Once we have our resource measurements and roof measurements we can model the house and tell you exactly how much you can produce and therefore how much consumption you can offset. In fact, we’re so confident about predicting production that we have a production guarantee in place.

Let’s Review Where We Are So Far

We know your consumption because we have seen your bills. We know how much you can produce because we’ve taken a look at your solar resource and modeled a system for you.

Let’s look at different real world example. A customer’s house has roof planes pointed southeast and southwest. She is using 8,100kWh/yr, as we found on her electric bill.

These two arrays combined will produce 8,186kWh per year otherwise known as more than 100 percent of her annual consumption.

Not too shabby for a system that barely takes up a corner of her available roof space.

What is the takeaway here? Know that depending on a few variables you can produce enough power to cover all of your consumption even here in cloudy Washington State.

More importantly, even if you cannot cover 100% of your usage, it can still make sense to move forward with an installation even if you only cover as little as 5%. Any step you take to reduce your consumption is a good step. And the economics of solar energy in Washington are such that our incentives don’t care if you’re offsetting 10% or 90% of your consumption.

That being said, there is an economy of scale with solar so that the bigger array is usually cheaper than a smaller array on a per unit basis.  What I mean is that installing 20 panels will not cost twice as much as installing 10 panels.

There are also some subtleties with our utilities with how much they charge you for minimum charges regardless of being 100 percent solar powered or not, and how they will credit you (or not) if you produce more than 100 percent. If covering all of your power needs with solar energy is your goal, make sure to talk to your contractor about all of the implications.

We can help with that.

Ready to learn more? Discover the top questions to ask a solar installer.