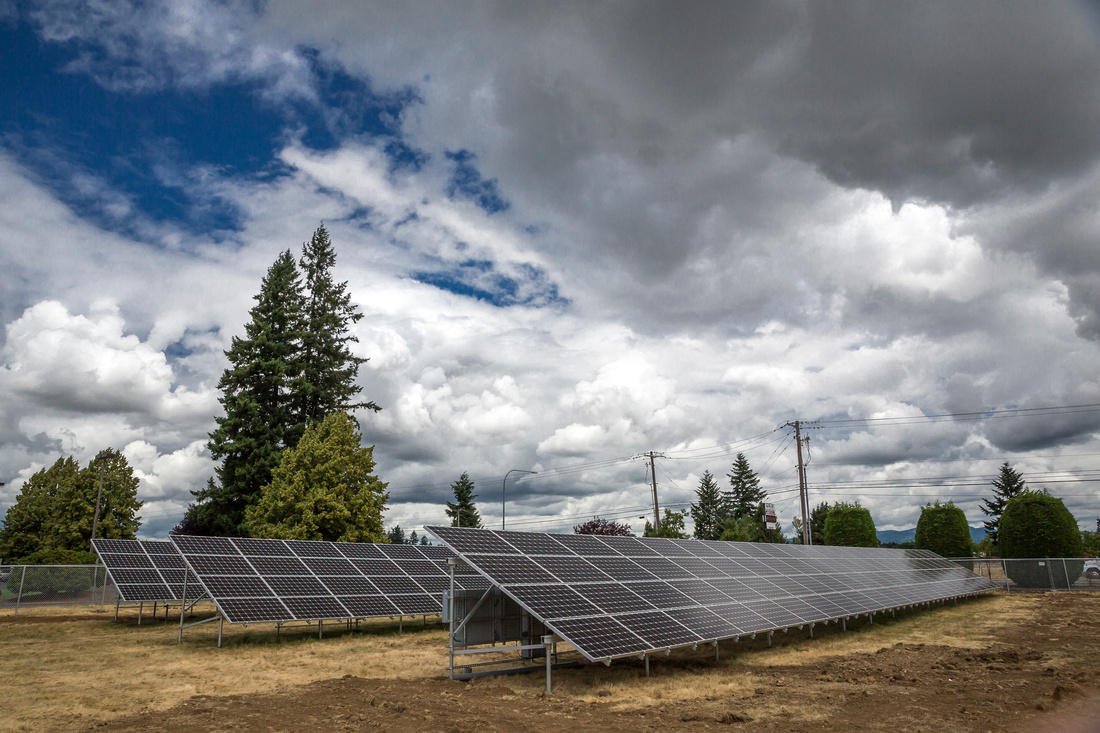 Two community solar projects in Washington State will soon be up and running, offering residents in Clark and Benton counties an affordable green investment that will save them money on their power bills.

A&R Solar is in the process of installing ground-mounted solar arrays in Kennewick and should be done soon. Work on the arrays in Vancouver began on June 1st and is expected to be complete by August. Both are the first of their kind in the counties.

Community solar allows people to own a small stake in a large solar array, and the production is credited on their utility bills. It lets people participate in renewable energy who don’t have homes suitable for solar panels (including renters), those looking for an alternative to investing in a home system, or homeowners who can’t afford the investment.

The programs are voluntary. Utilities are required under Initiative 937 to obtain 15 percent of their electricity from new renewable resources such as solar and wind (but excluding hydro). There are currently 40 community solar projects in Washington State, totaling 1.03 MW, according to Washington State University.

Not only will participating customers receive credits on their utility bills but also state production incentives of $1.08 per kilowatt hour.

Both projects use panels and inverters made in Washington, which qualify them for additional savings from state incentives. Overall, new renewable energy resource development in Washington has led to more than $8 billion of investment in the state, creating more than 3,800 jobs and generating more than $145 million in public tax revenue. Results from a 2014 Solar Washington study show that for every one dollar of the Washington State solar incentive redirected to PV system owners, the state sees $2.46 injected back into the local economy. In the case of 2013 installations, $48.2M will be injected in to the economy as a result of the $19.6M that the state will pay out in solar incentives.

The Benton PUD project broke ground in April. It has 272 solar panels in an array in Kennewick with a capacity of generating just under 75 kilowatts, enough to power around six homes a year.

PUD customers who signed up for community solar paid $250 per unit, with a cap of 40 units per customer. The utility sold a total of 1,500 units, holding a lottery to accommodate demand. Both residential and commercial customers were eligible.

The money generated from the sale of shares will pay for the project. Customers are expected to recoup their investment within three to four years. They will continue to earn energy generation credits through the life of the project.

Clark County PUD sold out its shares in its first planned community solar project so fast that it decided to build more arrays.

Participating customers will pay $100 a share and can buy up to 100 shares. The PUD estimates that customers will recoup their costs within four years. The utility sold a total of around 2,700 shares.

The project uses Washington-made equipment, including panels and inverters from Itek Energy and racking equipment from SunModo.

The PUD gets most of its power from the hydroelectric dams of the Bonneville Power Association. The rest comes from natural gas.