Powering your home with clean, limitless solar energy has become increasingly popular. That’s due in part to solar panel installation costs coming down in recent years.

It’s an attractive prospect: Considerably reducing or even eliminating a utility bill all while helping to propel the future of renewable energy.

However, even though the cost of installing solar panels is decreasing, not everyone can afford to install solar panels.

How does a solar lease work?

When leasing a solar energy system, a solar contractor installs solar panels on your roof for no money upfront, which makes solar leasing a very attractive prospect. 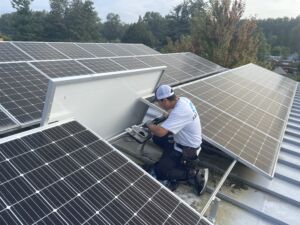 Once installed, those solar panels power your home like any other solar installation. However, you don’t own the power they produce. Instead, the solar installer retains ownership and charges a monthly fee – typically for 10-20 years.

That could sound like a good deal to some people, but here’s what you sacrifice when you choose to lease a system instead of owning one.

To help homeowners pay for a solar installation, there are often solar incentives on the federal, state, and utility level. While these incentives work to bring down the cost of purchasing a solar energy system, a homeowner who chooses to lease will forfeit these incentives to the installer or financing entity that actually owns the system.

Two of the most important incentives are the Federal solar investment tax credit (ITC) and net energy metering provided by your local utility. The latter is particularly significant if you live in an area that doesn’t receive consistent sun year-round like Washington and Oregon. Without this incentive, your leased system could cost more than a traditional utility bill.

Most solar leasing companies calculate monthly charges so that they are less than or equal to what a homeowner currently pays the utility, plus an annual rate increase (typically 3-5%). The installer will determine these charges based on the estimated annual production of the solar energy system and the expected local utility escalation rate.

However, in Oregon and Washington, solar leases typically do not pencil out financially for either the leasing company or the homeowner because monthly payments would likely be more than the current utility bill.

Why? Because relatively inexpensive hydropower significantly contributes to the energy mix, which in turn subsidizes the cost of energy in the region. And without the help of net energy metering, your leased system would likely not produce enough to cover energy consumption in the winter.

Take note that you should always ask about the length of the lease, the amount you’ll pay each month, and how much you can expect those payments to increase each year as the cost of electricity increases. Remember, the devil’s in the details.

However, depending on electricity rates in your area, solar leasing can make a lot of sense. Especially true if reducing greenhouse gas emissions is important and you’re unable to either afford the large upfront cost or take advantage of the tax credits. While the majority of utilities still burn fossil fuels to generate electricity, solar panels produce clean, renewable energy for the lifetime of the solar energy system.

Pros and cons of solar leases

What is a Power Purchase Agreement (PPA)?

Solar leases and Power Purchase Agreements (PPAs) are very similar. Like a solar lease, a solar contractor will install solar panels on your roof for no upfront cost but charge monthly over an extended period of time.

With a PPA, you agree to purchase the power generated by the system at a set price per kilowatt-hour (kWh). Therefore, a PPA works much like a utility bill. That’s to say, you’ll be charged for every kilowatt hour (kWh) actually produced each month instead of paying a flat lease charge.

Pros and cons of a Power Purchase Agreement

Due to the no upfront costs associated with a solar lease and Power Purchase Agreement, there’s a misconception that both offer homeowners free solar or no-cost solar. Actually, homeowners are effectively swapping a payment to the utility for a payment to the solar installer.

That’s not to say that solar leases or Power Purchase Agreements are bad. For some, these options can provide homeowners and businesses the ability to invest in their renewable energy future. However, be aware that these options won’t result in a free solar system, as they inevitably incur a cost and represent a long-term liability.

What’s more, these arrangements are not as lucrative as purchasing a solar energy system with a traditional loan from a bank or credit union, assuming you have the taxable income to utilize the federal solar tax credit. That’s because you will own both the system and the energy it generates, which will add value to your home and pay for itself before you’ve paid your last solar lease or PPA payment.

Speak to an A&R Solar consultant today to explore how a solar energy system can work to lower your monthly payments and reduce your home’s greenhouse gas emissions.