How to Double Your Revenue by Treating People Right

Conscious Company magazine interviewed A&R Solar CEO Reeves Clippard about the company’s philosophy and growth and his vision for the future.

What motivated you to make A&R an employee-owned company? 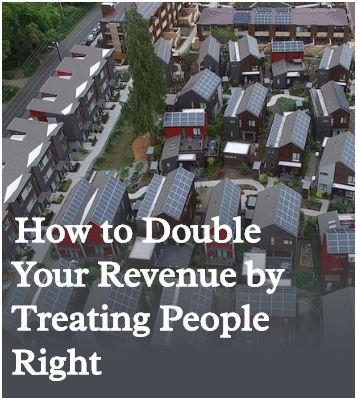 RC: I worked for very small companies where I had zero ownership stake, and I worked for mega-national companies where I had zero percent stake, and in both places, there’s this trend of, “how do you engage your employees to think like an owner and act like an owner?” Well, why don’t you just make them an owner? That seemed to be the simplest way. It’s certainly not the easiest way.

At this point, we are 100 percent employee-owned. All owners currently work here. Not every employee is an owner. We just rolled out a new ownership plan: people get their ownership after three years, and then they just get it; there’s no vesting schedule or anything like that. There are 43 employees right now and seven of us are currently owners. By the end of the year, 11 or 13 of us will be owners.

How has the technology improved since 2007, and what areas would you like to see continue improving?

RC: Panels have gotten more efficient, but not as much as a lot of people expect, thinking of Moore’s law and cell phones, how quickly computing advances. Solar panels do not follow that same kind of development curve.

The biggest improvements have been in process: simplification at an administrative level of being able to interconnect with the utility and get it through a permitting process. Also, standardization: manufacturers are able to reach an economy of scale to make sure that their product is compatible with the next product down the line. We’re keeping fewer parts on a truck and things are more universal so you can speed up the labor side.

Another important development is the panel manufacturers getting to a scale where prices have absolutely plummeted. They’re about 60 to 70 percent less than what they were just a couple of years ago. People are usually spending the same amount of money as they were, they’re just getting more for their buck.

What I’d like to see change is for people to realize that there is no magic bullet for solar two or three years down the line that will suddenly make the technology “viable.” It’s viable now. There’s no reason to wait three years. The government support that we have now may not be available in three years. Hopefully, we won’t need those incentives; I don’t think anyone in the solar industry wants to be married to incentives like we are, but we’re in a position where we need them until we can get to grid parity.

And I would like to see better ways for people to connect with their power. Right now, you just have a little LCD screen that says, “I’m producing these numbers that are a metric that I just don’t understand.” How do you get someone to think, “Okay, I really should change my behavior or think about my buying patterns in order to achieve some kind of goal” — be that net zero or being a producer or even just making whatever impact they think they should?