Energy Secretary Steven Chu announced Friday his department’s “SunShot” initiative to make solar cost-competitive by the end of the decade. 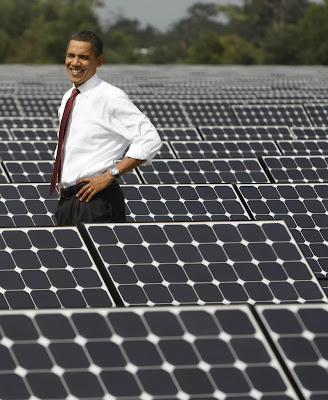 The move supports the call Chu’s boss made during the State of the Union speech last month that “especially clean energy technology” needs to be the modern equivalent of America’s “Sputnik moment” in the 60s.  The goal of the initiative is to slash the total costs of solar photovoltaic by 75 percent, making them cost roughly 6¢/KWH and more easily deployed, said Chu.

SunShot started with the announcement of $27 million in funding for projects to support development, commercialization and manufacturing of advanced solar technologies.

“America is in a world race,” said Chu, “to produce cost-effective, quality photovoltaics.  The SunShot initiative will spur American innovations to reduce the costs of solar energy and re-establish US global leadership in this growing industry.”

The initiative will also focus on steps to streamline and digitize local permitting processes to cut installation and permitting costs.

The technology investments will focus on four main pillars: technologies for solar cells and arrays; electronic equipment to optimize performance; better efficiency in the manufacturing process, and installation, design and permitting for solar systems.

US Sen Bernie Sanders, I-Vt, tried to capitalize on the announcement by reintroducing his “Ten Million Solar Roofs” legislation, that passed the Energy & Natural Resources Committee last year.  The bill mirrors a one-million roof program in California and features a competitive grant program for states and local governments to encourage solar energy installations.

“I look forward to working with the Obama administration to incorporate elements of the new solar initiative into the Ten Million Solar Roofs Act to make the legislation even stronger,” said Sanders.