Evan is proving to be a very talented, hardworking young man and we wish him continued success in the solar industry. 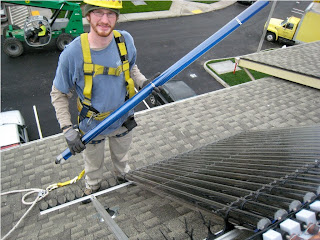 Evan Manderbach edged into the solar business by following a girlfriend to Hawaii. A college graduate with a degree in international studies and Spanish, Evan fell back on his construction skills that he picked up from summer jobs and took advantage of the solar industry growth on Oahu.

“Lo and behold, I got really lucky and found an ad on Craigslist for a solar installer,” he said. “By the end of the summer, I was leading job crews.”

Evan used that experience to find a job small solar photovoltaic systems in rural Bolivia, where people gained access to electricity for the first time. That training, coupled with a community college course in solar design, was enough to put Evan in demand and he now works at A&R Solar Corp. installing residential solar systems in Seattle.

He enjoys working with people who care about the environment and only sees the solar industry expanding. Evan thinks about starting his own company down the road, perhaps focused on installing solar equipment in developing countries.

“Honestly, it’s a fun industry to be in, and there’s a great fraternity of people you meet,” he said. “I feel like I really lucked out.”

A&R Solar has five employees who design and install solar hot water and solar electric systems in the Seatte and Bellevue areas of Washington State.