All Aboard! World’s Largest Solar Boat 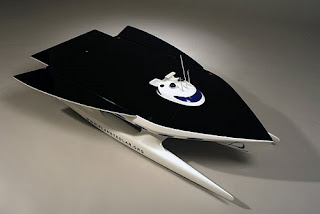 In late March, PlanetSolar will launch its catamaran for testing, and then embark on its round-the-world tour in early 2011.

“We are proud to support the unveiling of the world’s largest solar boat, powered by SunPower’s high-efficiency solar cells,” said SunPower Senior Director Jorn Jurgens. “SunPower’s technology will enable the catamaran to circumnavigate the globe with the speed and performance expected from the planet’s most powerful solar.”

Designed by a team of international engineers, it will be powered by approximately 38,000 of SunPower’s next generation cells, each cell offering an efficiency of at least 22 percent, the highest efficiency solar cells commercially available. The catamaran is expected to be the fastest solar boat to cross the Atlantic Ocean and the first to cross both the Pacific and Indian Oceans. Stopovers include Hamburg, London and Paris in Europe, New York and San Francisco in the U.S., andSingapore and Abu Dhabi. The solar boat will be available for public display during each of its stops, offering an educational opportunity to all visitors.

“We are excited that the solar-powered boat is now a reality,” said Raphael Domjan, CEO of PlanetSolar SA. “As we embark on the next phase of this project, we look forward to our around-the-world trip, and are confident that SunPower’s proven technology will get us there.”

SunPower’s high-efficiency solar cells lead the industry with up to 50 percent more power than conventional technology, and two to four times the efficiency of thin film technologies. The same SunPower solar cells integrated into the skin of the solar boat are the number one choice for rooftop solar systems on homes and light commercial installations in the U.S. With an all-black appearance, SunPower’s solar panels offer an attractive, affordable way to add solar to any building while maximizing the energy generated per square foot of any roof area.